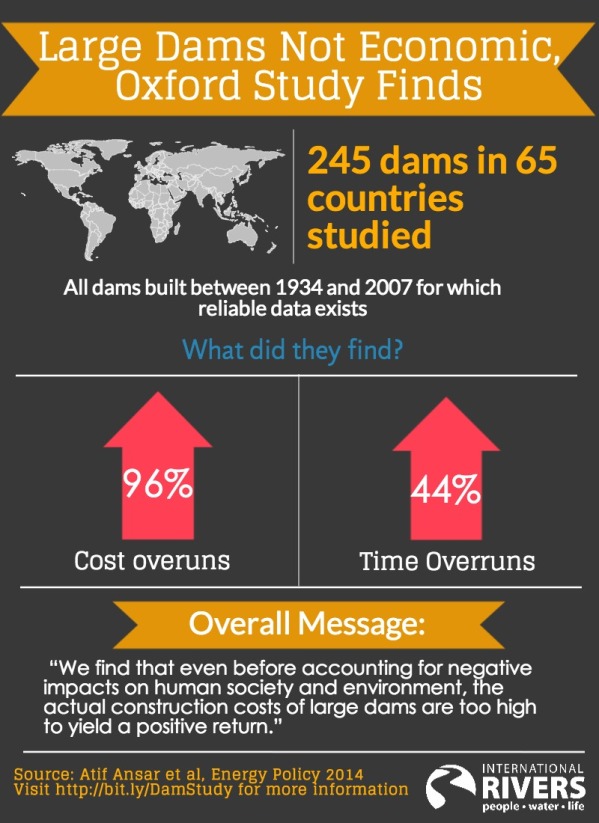 “We find that even before accounting for negative impacts on human society and environment, the actual construction costs of large dams are too high to yield a positive return,” a new report states. “Large dams also take inordinately long periods of time to get built, making them ineffective in resolving urgent energy crises.” Simply put, dams don’t just destroy the environment and impoverish local communities. They also don’t make economic sense.

The new report was prepared by researchers from Oxford University and is based on the most comprehensive economic analysis of large dams ever undertaken. The peer-reviewed scientific study offers a devastating verdict on the economics of large dams, and has important implications for future energy sector planning.

Over four years, the authors of the new study –  Atif Ansar, Bent Flyvbjerg, Alexander Budzier and Daniel Lunn – analyzed all large dams which were built between 1934 and 2007 for which reliable costs and schedule figures are available. Their database includes 245 projects in 65 countries with a total cost of US$353 billion (in 2010 prices). The findings of their analysis, which were published today, are stunning:

Dam builders and financiers frequently acknowledge the problems of the past, but claim that they have learned from their mistakes. The study by the Oxford research team shows that this is not the case. Neither cost nor schedule overruns have improved over time. “There is little learning from past mistakes,” the authors say. “By the same token, forecasts of costs of dams being made today are likely to be as wrong as they were between 1934 and 2007.”

The World Bank and other development banks often argue that their involvement improves the quality of risky projects. Again, the empirical evidence does not confirm this. Atif Ansar – one of the authors – told me in a personal conversation that projects supported by multilateral development banks “do not perform better in terms of cost overruns.”

The Oxford researchers conclude their evaluation with a series of recommendations. They suggest that energy planners need to forecast costs and schedules more realistically by integrating the empirical evidence for similar projects. Based on their database, they suggest that dam planners need to increase their cost estimates by 99% and their construction schedules by 66% if they want to achieve an 80% certainty that their projects are completed within budget and time.

The new paper illustrates what this means for the Diamer-Bhasha Dam in Pakistan. With 80% certainty, the giant project on the Indus River can be expected to cost $25.4 billion rather than $12.7 billion, and to be completed in 2027 rather than 2021. Under these circumstances, the project will not make economic sense. “Diamer-Bhasha Dam is a non-starter in Pakistan,” the authors comment. The same can be said for the Inga dams on the Congo, the Belo Monte Dam in the Amazon, the proposed dams on the Mekong mainstream and many other mega-projects.

The new research shows that energy projects that don’t depend on complex factors such as geology and streamflow and can be built quickly are preferable to complex large dams. “Many smaller, more flexible projects that can be built and go online quicker, and are more easily adapted to social and environmental concerns, are preferable to high-risk dinosaur projects like conventional mega-dams,” concluded Bent Flyvbjerg, the principal investigator, as the new paper was published. “If leaders of emerging economies are truly interested in the welfare of their citizens, they are better off laying grand visions of mega-dams aside,” his co-author Atif Ansar concurred.

Many actors have vested interests in building dams and may try to disregard the findings of the new study. Disinterested government officials and investors should take the facts and figures of the Oxford study seriously. The empirical evidence demonstrates that even on economic terms, large dams are usually not the best energy solution.

Peter Bosshard is the Policy Director of International Rivers. He tweets at @PeterBosshard.

My Tweets
Save Indus River

Save Indus River: Say No To Any Dams, Save Indus River. Save livelihood of millions of people, the riverine life, eco system, environment & Indus Delta. The contents are for educational and research purpose only, Feel free to download any piece for your personal use. Marketing or selling of any of the contents is prohibited. Most of the material is copyrighted.

A daily selection of the best content published on WordPress, collected for you by humans who love to read.

The best longform stories on the web

The Art and Craft of Blogging

The latest news on WordPress.com and the WordPress community.